Posted at 19:02h in News by Daniel Hammond
0 Likes

When I initially thought about writing this article, it was to discuss some of the different categories of luminaire. After more careful contemplation, I thought it best to reflect on the changes I have observed over my 46 years in the lighting industry.

The question I began to ask myself is, “what has changed”? To be frank, not much in terms of luminaire design in the various type categories. I am not referring to those luminaires offered for residential and general domestic use, but to luminaires for project lighting.

There are some basic luminaire types, the following being typical types:

There are of course other, lesser categories such as street luminaires.

Of course, they are LED but, remarkably, the majority follow the same general luminaire style and design as their old counterparts. Fortunately, there are some dynamic companies including manufacturers and importer/distributors who stand out from the crowd and are introducing new and interesting luminaires.

The most exciting development is in the changing face of other technologies being integrated with luminaires. Most of us are familiar with the Digital Addressable Lighting Interface (DALI), DMX, KNX and Lonworks. Nowadays, there are several other control systems including systems such as Bluetooth, Bluetooth Beacons, Bluetooth Mesh and others.

Even more exciting technologies being integrated into luminaires include technologies associated with the internet of things (IoT) and the Fourth Industrial Revolution. These include Power over Ethernet (PoE); Indoor Positioning Systems (IPS); Visible Light Communication (VLC); Li-Fi communication; Human-centric Lighting (HCL) and more. 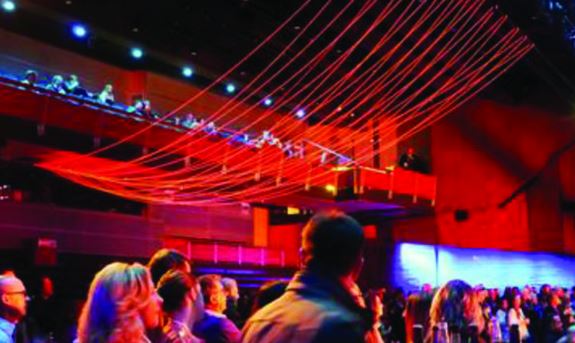 Thankfully, some manufacturers and distributors offer custom-designed products where volumes are available. In certain instances, some South African manufacturers are even prepared to make small production quantities or, in rare instances, one-off items. We are indeed spoilt in South Africa because that level of service would not be available overseas.

These product developments were made possible by the incredible versatility of LED lighting, which offers a vast assortment of beam angles; correlated colour temperatures (CCTs); longevity and, in some instances, its tiny size and scalability, among others. The electronics in the drivers are now so sophisticated enough to control CCT, hue, dimming and more.

Light projection for entertainment such as the installations at the Grand Mosque in Abu Dhabi or at the Sydney Opera house now takes architectural lighting to an entirely new level.  At the 75th anniversary of Queen Elizabeth II’s reign, Buckingham Palace was illuminated with light projection that changed to match the programme of events as the evening progressed.

Simple indoor light projection onto floors is now also being used to indicate exits, places or items of interest in offices, museums and galleries.

As recently as October 2018, I encountered fibre-optics diffusing laser light to illuminate over distances, both indoors and outdoors. The fibre-optic cable can be shaped into any form.  It can adorn clothing, especially costumes used in theatre productions. Only a single laser light engine is required to send the light through the cables (see Fig. 1). This technology is a scaled-up version of the decorative fibre-optic lights that have been around for some time, the only difference being that they were not laser light driven. They have been used to illuminate the lanes underwater in competition swimming pools.

I have previously written about lighting systems overseas where the luminaires are powered by PoE, including HCL and VLC. They provide full integration with all the management systems within the building and provide for democratised lighting and climate control.

Democratised control is where the users occupying a space can set the light level, irrespective of whether they have a fixed workspace. In addition, they can also set the temperature for their space via an application on their smartphones.

Another, more important finding is that most users in smart buildings prefer to set their lighting to around 150 lux. Many will question this in terms of our outdated standards in South Africa. In many countries, illuminance levels in documentation are listed as guidance for the illumination engineer. As an example, SANS 10114-1 states that the illuminance level for offices where computers are in use should be 500 lux. Why, then, do the users in offices prefer to work on their computers and smart devices at 150 lux? Something does not add up!

In conclusion, I am sure that new lighting technologies will still emerge. We can but wait with great anticipation.